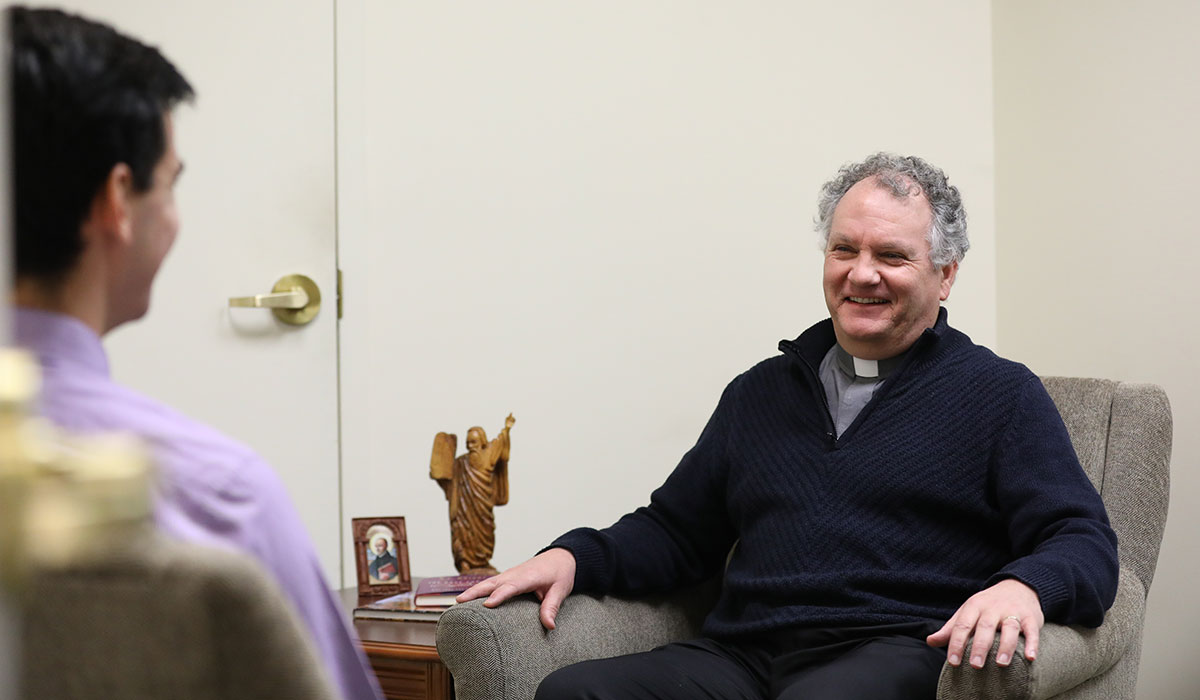 Seminary formation and academic preparation for priesthood generally takes four to six years depending on familiarity and knowledge of the Catholic faith and the extent of academic background in the study of theology and philosophy. In addition to its academic programs for Basselin philosophy scholars, pre-theologians, and theologians, Theological College also offers a five-year S.T.B/S.T.L. track, accommodating newly ordained priests who return to the seminary for a “fifth-year option” — an extra year — to complete the S.T.L. degree at Catholic University. The same option is offered for the J.C.L. degree, which usually takes an extra two years. Resident priests are offered private accommodations in the newly renovated priests residence in TC’s Providence Hall annex. Theological College’s pastoral formation program guarantees the mentored placement of every seminarian in parishes, hospitals, and myriad other ministry opportunities across the DC metropolitan area. The spiritual and human components of formation are also central to these years during which seminarians are accompanied in daily and weekly prayer, liturgy, reflections, counseling, internal and external spiritual direction, and a dynamic, healthy, and balanced community life.

The best introduction to the formation program at Theological College lies in a reflection on the sacrament of orders and its meaning for priestly formation. By that sacrament men are specially configured to Christ, head and pastor of the Church, and empowered to act in the name of the whole people of God. Conferring a spiritual and indelible mark, the sacrament of orders creates a permanent and irrevocable link to Christ and to the Church. These relationships to Christ and the Church charge a priest to preach the Gospel, to sanctify the people of God and to lead them on right paths in imitation of Christ who came as prophet, priest and shepherd for the salvation of all people. The sacrament of orders confers on a priest an identity and a mission which call for a special way of life, involving celibacy, simplicity of life, obedience, prayer and pastoral service.

The goal of the seminary is to provide a man with the intellectual, pastoral, spiritual, and human formation for the reception of the sacrament of orders and the means to meet the expectations attached to the priestly office. The seminary should also equip him with a secure foundation for on-going education and continuing personal and spiritual growth after ordination.

The formation programs of Theological College are grounded in the documents of the Church which govern priestly formation, in particular the fifth edition of the Program of Priestly Formation, with its emphasis on the above-mentioned four dimensions of  formation, and the Apostolic Exhortation of Blessed Pope John Paul II, Pastores Dabo Vobis. In addition, since Theological College is under the direction of the priests of the Society of St. Sulpice, the seminary program is enlivened by the spirituality of the Society and the French School that informs it.