Even if you are unable to attend, please consider the different giving options listed at the bottom of the registration form, below. 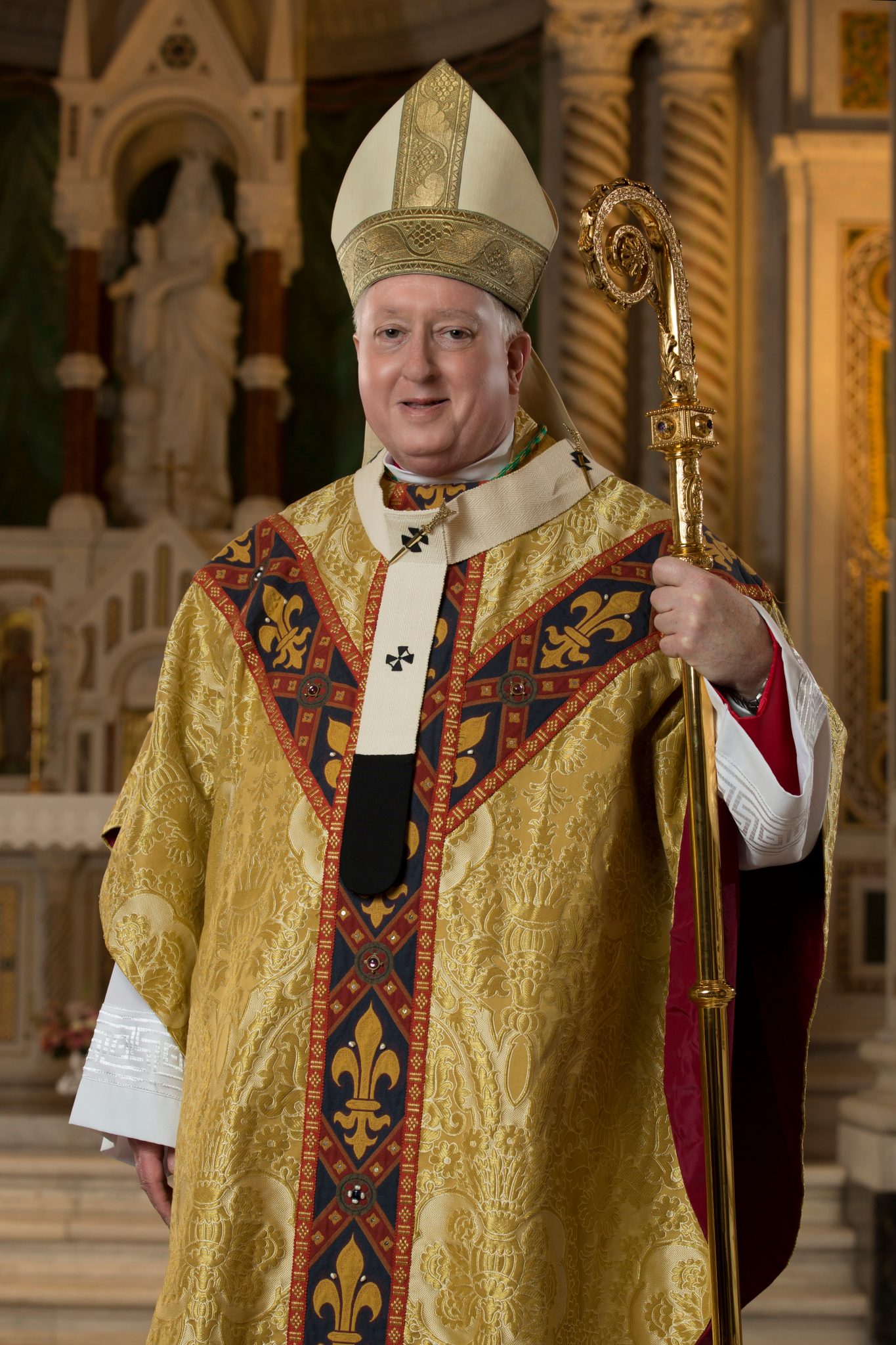 ARCHBISHOP OF THE ARCHDIOCESE OF ST. LOUIS

The Most Reverend Mitchell T. Rozanski has served as the 10th Archbishop of St. Louis since Aug. 25, 2020. He previously served as the Bishop of Springfield, Massachusetts, from Aug. 12, 2014, until his installation in St. Louis.

Archbishop Rozanski was born in Baltimore, Md., on Aug. 6, 1958, the first of three sons born to Alfred and Jean Rozanski. The family lived in Fells Point, Md., where they attended Holy Rosary Parish. When he was eight years old, the family moved to Dundalk and the parish of the Sacred Heart of Mary, Graceland Park, Md., where he attended the parish elementary school. After graduating from Our Lady of Mt. Carmel High School (Essex), he received his undergraduate degree from The Catholic University of America before entering Theological College, where he received seminary training.

He was ordained a priest of the Archdiocese of Baltimore at the Cathedral of Mary Our Queen on Nov. 24, 1984. He served for 20 years in several parishes in the archdiocese until 2004.

On July 3, 2004, Pope John Paul II appointed him Auxiliary Bishop for the Archdiocese of Baltimore. He was ordained a bishop on Aug. 24, 2004, at the Cathedral of Mary Our Queen. At the time, he was the youngest bishop in the United States.

Archbishop Rozanski has served on the National Committee for the Protection of Youth and Young People, the National Advisory Council of the United States Conference of Catholic Bishops (USCCB), and the Ecumenical and Interreligious Affairs Committee of the USCCB. Archbishop Rozanski is a member of the Fourth Degree Knights of Columbus, a Knight Commander of the Equestrian Order of the Holy Sepulchre of Jerusalem, Northeast Lieutenancy, and as episcopal moderator of the National Association of Holy Name Societies.

As this year’s Alumnus Lifetime Service Award recipient, Theological College recognizes Archbishop Rozanski’s lifetime of outstanding priestly service as a humble and beloved pastor, Christian conciliator, mentor of the lay faithful, champion of the poor and vulnerable, and joyful witness to the Word of Jesus Christ in the tradition of the priests of St. Sulpice.

In a nutshell, I paint, write, and tell stories — and then travel all over the place telling the stories behind what I paint and write.

My first formal art lessons were at the Moore College of Art in downtown Philly, my hometown. They had classes for young people on Saturday mornings which I attended through all four years of high school. The real blessings and life lessons I received there were not just about learning how to make art in a variety of techniques and styles, but discovering beauty in and with other kids who did not look like the kids in my white, Catholic, Monday through Friday world. In the beginning, Black, Jewish, Puerto Rican, and Asian teens were as new to me as ink, paint, charcoal, and clay. And I grew to love it all.

After high school, I majored in Art at Moravian College in Bethlehem, Penn., and later received an MFA in Painting at the American University in Washington, D.C. I enjoyed wonderful art education at both places and am grateful to this day for the many ways in which both schools broadened my horizons and abilities.

For 11 years, I was an associate professor of Studio Art and Art History at De Sales University in Center Valley, Penn. In 1994, I transitioned into working fulltime as an artist who leads retreats, creates books, and gives presentations. Boy, I didn’t see that coming! But you never know where the Holy Spirit is going to lead you, and Her plans always work out better than anything I could do left to my own devices.

Since 1987, I have taught every summer at the Grunewald Guild, an interfaith art community in the Cascade Mountains of Leavenworth, Wash., which offers week-long classes in any number of art disciplines. Believe me, there are worse ways to spend summer days.

And finally, since 2009, I have lived and worked in Camden, N.J., where I have furthered my art education in the context of social justice and finding beauty in the margins.

In 2017, I turned 60 and celebrated 40 years as a religious brother in the Oblates of St. Francis de Sales. I firmly believe the best is yet to come.

Madonnas of Color is the title of my most recent book,  a celebration of Mary as the beloved and timeless Madonna of Color. In this book, and in my Alumni Day lecture, I hope to offer new relevance and reverence to ancient titles and traditions surrounding the Black Madonna and to help others to see her crucial importance in our divided world. Mary the Madonna of Color reminds us that following her Son means centering our hearts on love, not fear. 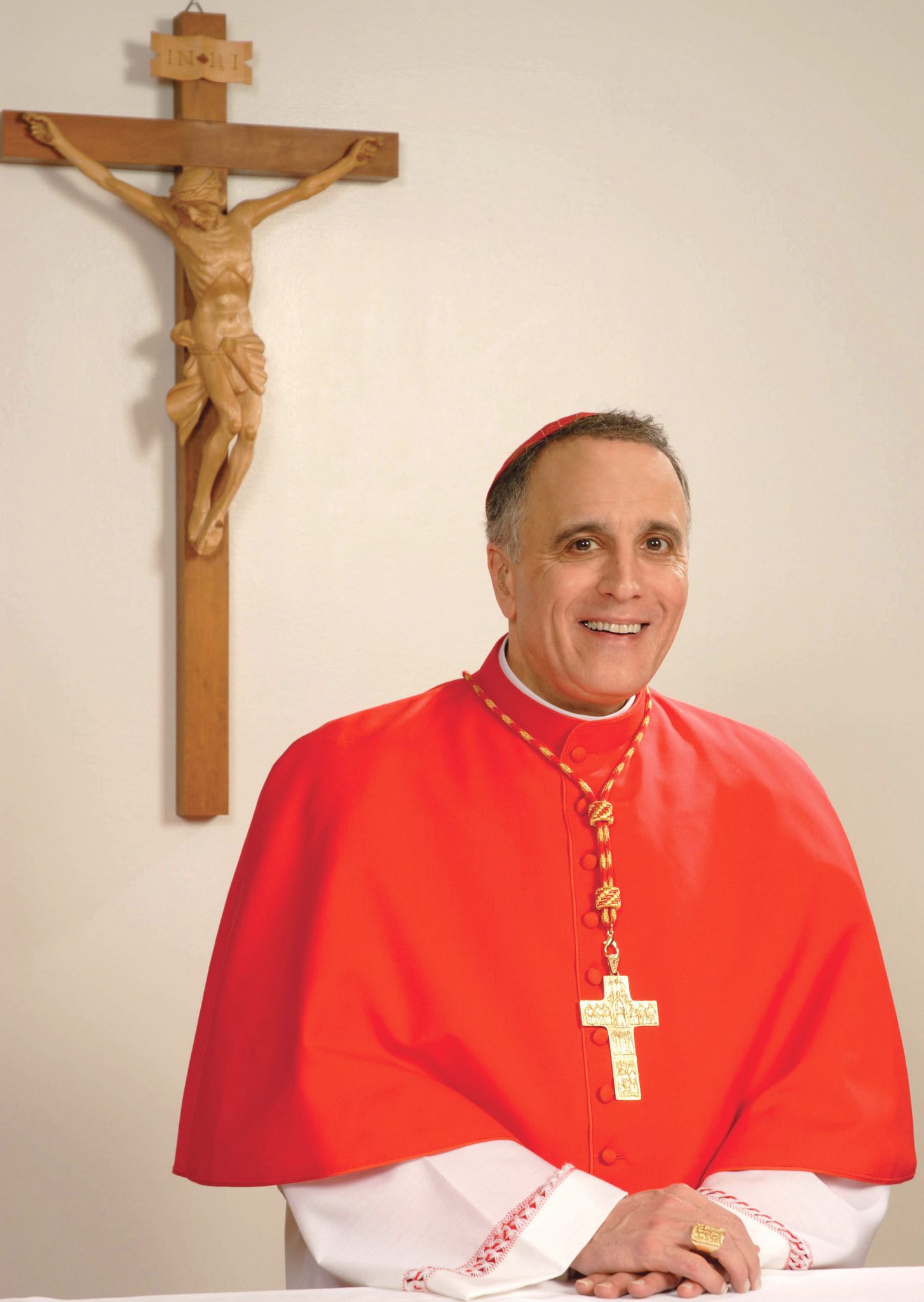 His Eminence Daniel Cardinal DiNardo is the metropolitan archbishop of Galveston-Houston and pastor to its 1.7 million-plus Catholics (and the 6.2 million people within the archdiocese) and 435 priests in 146 parishes and 59 schools spread over 8,880 square miles. His seats are St. Mary Cathedral Basilica in Galveston and the Co-Cathedral of the Sacred Heart in Houston.

A Basselin scholar in formation at Theological College for three years, in 1972 he received his master’s degree in Philosophy from The Catholic University of America. His thesis was titled, “The Status of the Image in Good and Bad Rhetoric:  Plato’s Phaedrus, Gorgias, and Sophist.” He received degrees in Sacred Theology from both the Pontifical Gregorian University and the Patristic Institute Augustinianum in Rome.

He was ordained to the priesthood for the Diocese of Pittsburgh on July 16, 1977, and served as parish pastor, seminary professor, spiritual director, and in the chancery. From 1984 to 1991, he worked in Rome as a staff member for the Congregation for Bishops, as director of Villa Stritch (the house for American clergy), and as adjunct professor at the Pontifical North American College. In 1991, he returned to Pittsburgh, serving as pastor to several parishes and again in the chancery.

He was appointed coadjutor bishop of Sioux City, Iowa, and ordained there as a bishop in October 1997. As his episcopal motto he adopted: “Ave Crux Spes Unica” — “Hail the Cross, Our Only Hope.” He succeeded retiring Bishop Lawrence Donald Soens of Sioux City in November of 1998. He was named coadjutor bishop (later coadjutor archbishop) of Galveston-Houston in January 2004 and succeeded Archbishop Joseph Fiorenza on February 28, 2006. On June 29, 2006, he received the pallium from Pope Benedict XVI. He was elevated to the College of Cardinals in November of 2007 at St. Peter’s Basilica in Rome. He was designated the titular Church of Sant’Eusebio in Rome.

As a member of the Sacred College, he served as a Cardinal-Elector in the Papal Conclave of 2013, which saw the election of Pope Francis to the See of Peter. In November of the same year, he was elected by his brother bishops as the Vice President of the United States Conference of Catholic Bishops (USCCB) for a three-year term. Cardinal DiNardo then served as President of the USCCB, having been elected in November 2016, ending his tenure in November 2019.

Cardinal DiNardo serves on the Board of Trustees of Catholic University of America and is a member of the Pontifical Council for the Pastoral Care of Migrants and Itinerant People. He is the Grand Prior of the South West Lieutenancy of the Order of the Holy Sepulchre, a papal order of Knighthood, in which he holds the rank of Knight Grand Cross. Among many other past fruitful ministries, Cardinal DiNardo served as episcopal moderator for the National Catholic Partnership for Persons with Disabilities (NCPD). The NCPD offices are located in TC’s McCormick Pavilion. Over the years, for annual meetings, the Cardinal had been hosted at TC, saying Masses in the main chapel for NCPD leadership and dining in the refectory with the group while mixing with faculty and seminarians throughout his stay.

As this year’s Alumnus Lifetime Service Award recipient, Theological College recognizes his lifetime of outstanding priestly service as a pastor, exemplary leader in the community and Church, theological educator, and advocate for justice and equality in the tradition of the priests of St. Sulpice.

We look forward to seeing you on October 12th! 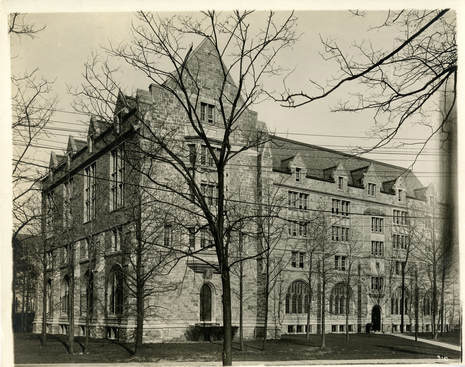 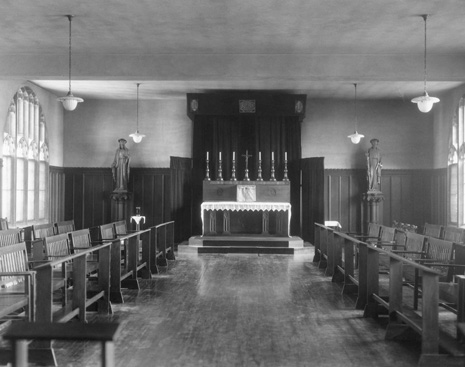 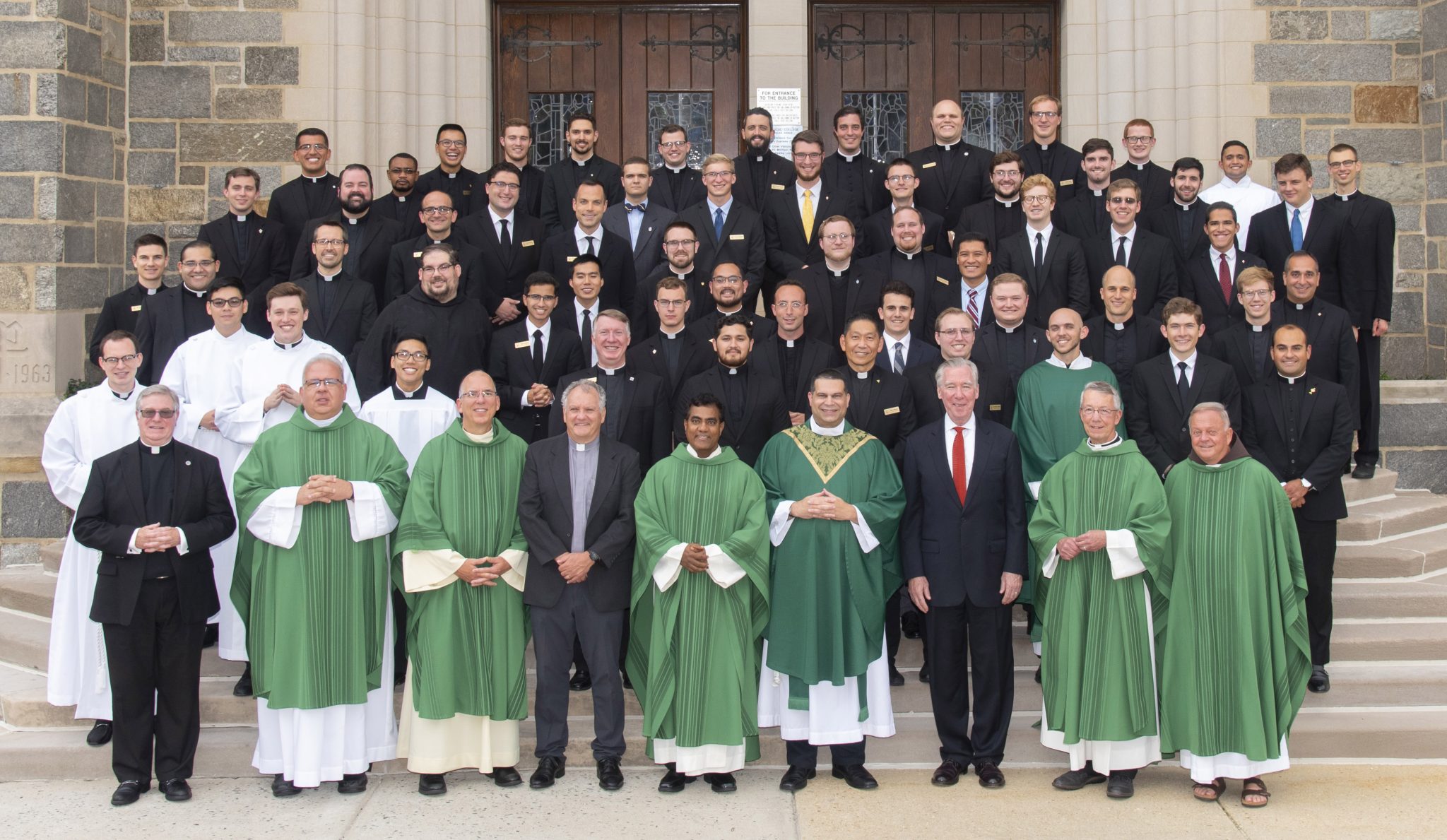 The Alumnus Lifetime Service Award was instituted in 1991 to honor those alumni of Theological College who have served with distinction and humility throughout their priestly ministry “according to the Sulpician ideal ‘to live supremely for God in Christ Jesus.'”