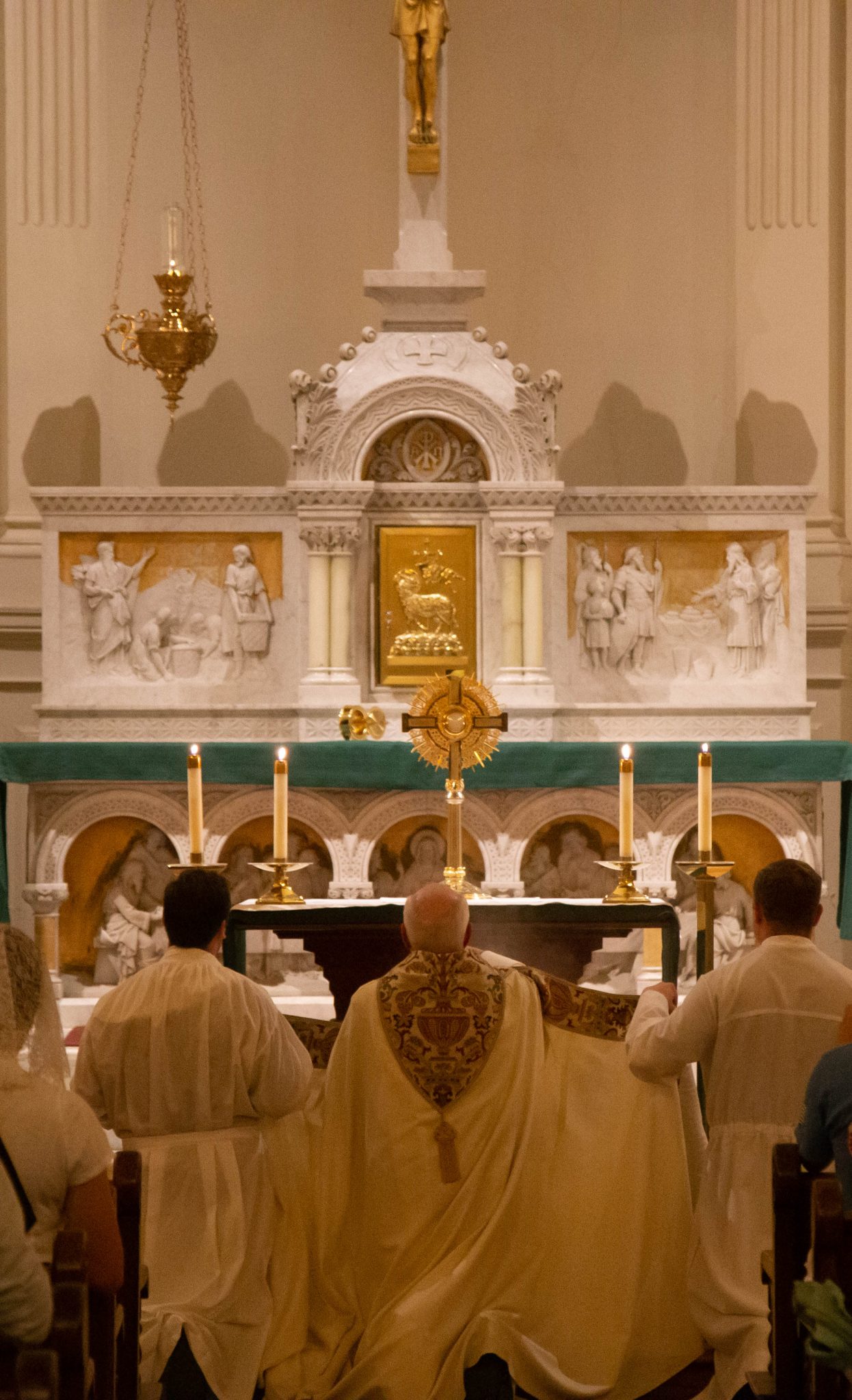 Above,  rector Rev. Gerald McBrearity presiding at the Wednesday Eucharistic Adoration Hour in the Caldwell Hall Chapel, hosted weekly by the  Basselin Scholars of Theological College.

A LETTER FROM THE RECTOR

In 2005, the author Geraldine Brooks wrote a novel titled March, which eventually won a Pulitzer Prize.  This fiction story was about the father character of Louisa May Alcott’s Little Women, who had enlisted to serve as a chaplain during the Civil War.  In the novel, he wrote in a correspondence to his wife, “How often is it that an idea that seems bright bossed and gleaming in its clarity when examined in a church becomes clouded and murk-stained when dragged out in the field of endeavor.”  Chaplain March had an idealized vision of serving as a chaplain but, as the first bodies were brought in, a new reality emerged.  If he knew when he enlisted what he knew after the first day of battle, would he have enlisted?  This is one of the many questions this work raises.

The mission of Theological College is to do everything possible to enable a priesthood candidate to be as informed and realistic as possible about the expectations of ordination to the diocesan priesthood.  Furthermore, Theological College seeks to assist each seminarian to remain faithful to his vocation even in the most difficult of circumstances.  This is especially important at this moment in the life of our beloved Church.  The human, spiritual, pastoral, and intellectual dimensions of formation provide opportunities for seminarians to evidence that they are caring, competent, and contemplative priesthood candidates who are fully prepared to be parish priests in a quickly changing cultural and ecclesial culture.

Chaplain March realized, “How often is it that an idea that seems bright bossed and gleaming in its clarity in a church becomes clouded and murk-stained when dragged out in the field of actual endeavor.”  For every priest, however, the life, death, and resurrection of Jesus, the Good Shepherd, remains the source of inspiration and strength. If this is not the case, in the field of actual endeavor he will be unable to remain faithful to his ordination commitment to be, for everyone he meets, the kind of missionary disciple that Jesus was.  In the words of Langston Hughes, the mission of Theological College is to prepare a new generation of priests who will each and every day “gather up in the arms of [their] love those who expect no love from above.”

In the arms of your pity

The sick, the depraved,

The desperate, the tired

Of our weary city

In the arms of your love—

No love from above.

Sincerely yours in Christ,