Coming upon our final semester of studies, my four classmates and I made the trek to Croghan, NY, to visit the home and gravesite of Theodore Basselin, the benefactor whose endowment provides for our studies as Basselin Scholars. We were also accompanied by Fr. Christopher Seibt (B ’08, T ’13), who is a Basselin and TC alumnus as well. It was a great privilege to see Mr. Basselin’s house and to visit his family graveyard, where he is buried along with his wife, parents, and relatives. Across the street from his home, we were able to offer a mass for his eternal repose at the parish church that he helped to build, St. Stephen’s. Next to the parish is also the building for the Father Leo Memorial School, now the American Maple Museum, which was built entirely by the generosity of Theodore Basselin. A graduate of the school, Kenneth Proulx, was gracious enough to join us for our day in Croghan and give some historical insights along the way. A native of the area, he wrote the biography of Theodore Basselin that each Basselin Scholar receives upon joining the program, The Life and Enterprise of Theodore B. Basselin. The day flew by quickly, but the memory of Mr. Basselin’s simple hometown will certainly remain with us for much longer than a single afternoon.

The day was marked by prayer, as we offered mass for his soul and recited some prayers together at his grave. But it was also a day of fraternity for me and my classmates. Being together in the home of our benefactor was a unifying experience that also refreshed us and gave us the renewed vision to tackle our final semester of theses, comprehensives, and quickly vanishing sleep! With our time as Basselins coming to a swift close, the day brought to mind our gratitude for Theodore Basselin’s gift to the Church. May he rest in peace, and may his generosity continue to form men for many more years. 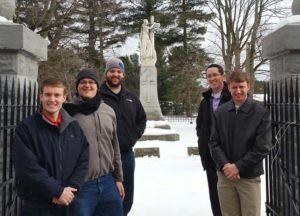 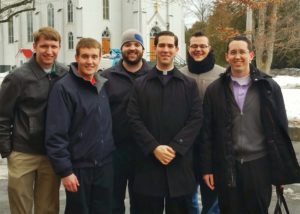