Just two days after President Obama’s announcement of new immigration reforms, Daniel Zinger (pictured above, during the Mass’s  “handshake” of peace) – a second-year theologian from the Diocese of Syracuse – and Erick Viloria-Romero – a fourth-year theologian from the Diocese of Rochester—headed to El Paso. The cross-border Eucharistic celebration was concelebrated by the bishops of the three area dioceses: El Paso, Texas; Las Cruces, New Mexico; and Juarez, Mexico. A lector read the first reading from Juarez in Mexico, while the second reading was read on the American side. The responsorial psalm was recited together, and Communion was shared on both sides. Because the border is marked there by a chain-link fence, every part of the Mass was visible from both countries. Daniel related that it was a very beautiful, though dramatic event: “During Communion, a few dozen desperate people breached the fence. There needs to be a way – calling in prayer upon God to help – to address the problems faced by these people who don’t want to be a part of the cartels and violence that has dissolved the existence of three states in Mexico.” The following day, the seminarians  visited Annunciation House, founded in 1978 and serving a flood of undocumented immigrants, particularly minors, since a request from the Border Patrol this past June. This was the most moving aspect of the trip for Erick: “We learned a lot while listening to their stories and trying to accompany them. And they all said the same thing: the Catholic Church is their only refuge; it is the only place where they have found active advocacy and a nurturing environment.”  The seminarians will share the details of their trip in the Spring 2015 issue of The Crossroads. 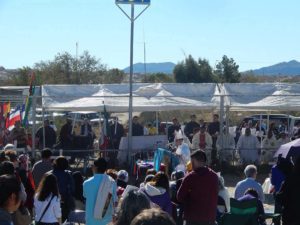 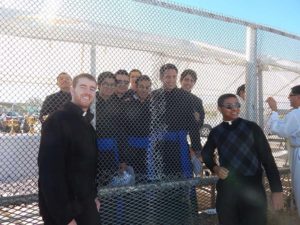