Joined by 11 brother seminarians from St. John Fisher Seminary (Diocese of Bridgeport) and 8 from Mount Angel Seminary (Archdiocese of Portland)—all staying at TC—as well as by the entire group from the Dominican House of Studies next door, the seminarians and concelebrating priests at Theological College were escorted across Michigan Avenue by the secret service, who allowed them entrance to the campus where the Mass was taking place off the East Portico to the Basilica of the National Shrine of the Immaculate Conception.

Most of the seminarians were seated inside the Basilica, with 2,000 other seminarians and religious. Here, the Pope greeted them more intimately as he passed along the aisles before the Liturgy. Outside, all five TC seminarians from the Archdiocese of Washington served at the Mass, and another group of six transitional deacons were serving as extraordinary ministers of the Eucharist. Meanwhile, stationed on the roof of TC, NBC national news and ABC’s local affiliate, WJLA,  offered live coverage and onsite interviews with one of our TC seminarians(click here) and with Rector Fr. Phillip J. Brown, PSS (click here). One day prior to the event, NPR posted a web story featuring Theological College (click here) in its analysis of the rise in vocations among millennials during the tenure of Pope Francis. During the papal visit, Theological College accommodated the National Catholic Partnership on Disability for Mass earlier in the day, and by providing front-fence seats for the Pope’s passage along 4th St. (see story here).

Deacon Keith Burney (see photo above), who assisted at the Mass, offered these comments in an interview with CUA Magazine:

The Vatican requested five deacons for the Mass, so all five transitional deacons for the Archdiocese of Washington were assigned to serve. I found myself next to the Pope for the entire Mass. When I was on the altar with Pope Francis, I was mainly focused on the tasks I had to perform — preparing the chalice, incensing the Holy Father, etc. — rather than the meaning or feeling of the experience.  However, when I turned my phone back on after the Mass, I immediately received numerous text messages from family and friends, showing pictures of me and the pope on their TV screens, and expressing excitement for me.  It was a great blessing to see the experience through their eyes, and know that somehow they felt more connected to and blessed by Pope Francis through me.  The Holy Father’s ministry unifies all the local churches throughout the world, and ultimately unites us back through time to St. Peter, the rock on whom the Church is founded, so in that moment I served to unite my family and friends to that larger reality.  For me, as a seminarian, deacon, and future priest, it simply reminded me that I am meant to be a “man for others” — an instrument that God uses to give his grace to his people. 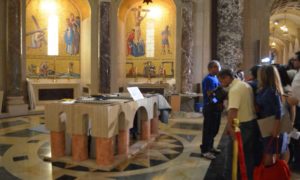 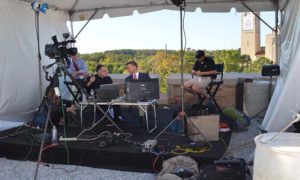 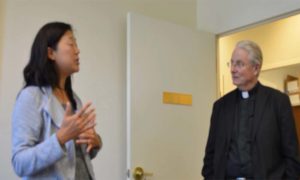